From Bridal Dreams To Brassybra!

From Bridal Dreams To Brassybra!

When you take a pinch of motherhood, a dash of and a whole bucket full of passion, you are sat well within the depths of Katherina’s creative mind. Her magical creation of Brassybra has become a worldwide sensation, bringing a sense of both empowerment and comfort to every woman, who dares to wear the fashion of her dreams! Brassybra was conceived over seven years ago, when Katherina realised she was ready to undertake a mission in the world of lingerie, when it came to light that she could find no suitable strapless bra to fit effortlessly with her strapless wedding dress. Slapping on duct tape and trying to achieve a safe, stylish way to wear strapless dresses, was given a huge thumbs down from Katherina; yet she realised the potential of an easy to cut, easy to shape tape that could both lift, support and be invisible when worn with strapless, backless and cut out fashion items. Many long hours of research, experiment with materials and shapes, Katherina was actually creating a pioneering item of clothing for women of all shapes and sizes could benefit from; and the journey was no longer confined to theory. Friends and family eagerly joined in Katherina’s creative journey, and with growing popularity among her circle of friends and eager anticipation for the future of the design, it was beginning to shape the foundations of today’s ‘hot off the press’ Brassybra; which has now been featured in over six major publications, including The Daily Mail and InStyle magazine. 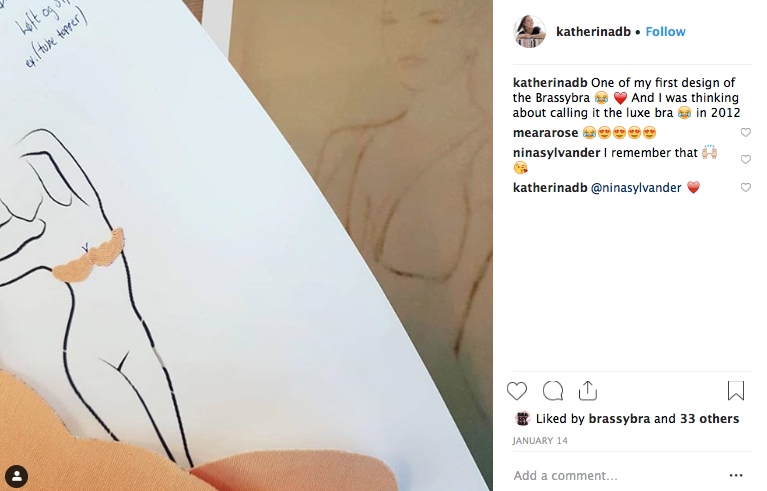 Since the years of its inception, Katherina has settled on a workable, durable and breathing material, a cotton based material with elastane, which now boasts the name Second Skin Technology, which has been supported by Innovation Norway and Proneo. It has molded itself onto the breasts of thousands of women who proudly stand by its technology, support and the team behind the name. The material effortlessly shapes into an adhesive bra, for any female to use, from sizes A-DDDD. Katherina’s dedication to her craft, has proven both successful and insightful for like-minded creators; as a mother of two, to her daughter, 6, and her son, 3, she has curated an all female empire, with ambassadors and team members worldwide; in addition to this, Brassybra ensure quality working conditions for the product’s creators, an important factor for the team, which establishes an impactful impression upon buyers.

The brand has an insightful and compassionate tone, each year a chosen charity is supported by Brassybra, most often, charities that highlight female health and lifestyles. With such a heavy focus on female strength, it really speaks volumes that self-confidence is at the core of the brand and has been Katherina’s personal journey to make this a successful reality. Every woman should be able to feel both sexy and confident, whilst wearing the fashion that they adore so deeply. It isn’t just about looking good, it’s about feeling good and Brassybra have accomplished this mission with smiles on their faces and positivity in their soul. It’s time to start living for you!

Feel free to take a look at all that they offer over on their Official Website.